The myth of cost inflation

“It’s not about inflation, it’s about price hikes for these guys.” It is simply incorrect.

No, companies have not doubled their profits, and the price hikes are not due to corporate misdeeds. If evil companies are to blame for the price hike in 2021, as Elizabeth Warren puts it, I imagine they were magnanimous and generous companies when there was little to no inflation, right? ?

Inflation is the tax of the poor. It destroys the purchasing power of wages and swallows up the little savings that workers accumulate. The rich can protect themselves by investing in real estate, real estate and financial assets, the poor cannot.

Inflation is not a coincidence, it is a policy.

The middle class and working people not only fail to see the benefits of inflation, but they also lose in real wages and also in their future prospects. Robert J. Barro’s study in over 100 countries shows that an average 10% increase in inflation over the course of a year reduces growth by 0.2 to 0.3% and investment by 0. , 4% to 0.6% the following year. The problem is, the damage is well entrenched. Even though the impact on GDP is apparently small, the negative effect on growth and investment persists for several years.

Despite the message from central banks, who repeat that inflation has temporary components and is fundamentally transient, we cannot forget:

Inflation will not fall in 2022 according to central banks, inflation will increase less in 2022 than in 2021. It is not the same thing.

When some agents speak of “transient” inflation, they mean that it will increase less in 2022 than in 2021, not that prices will fall.

The big beneficiary of inflation is the government, and Ms. Warren knows this, which is why she advocates inflationary monetary and fiscal policies. On the one hand, the monetary tax receipts of captive economic agents increase (VAT, income tax, corporate taxes, indirect taxes) and on the other hand the accumulated debt of the State is partially “devalued”. But the public accounts do not improve because the GDP slows down, the structural deficit remains high and therefore the absolute debt does not fall.

How many of you will increase your salary by 12% in three years?

Governments in deficit see their real spending increase and the structural deficit does not decrease.

Wages and pensions do not increase with inflation. Hardly anyone will see their labor compensation increase by 12% in three years. Median real wages in the United States have fallen due to inflation, according to data from the St Louis Fed.

Inflation is not the CPI (consumer price index). Inflation is the loss of purchasing power of money which causes a persistent rise in most prices regardless of their sector, demand, supply or nature, and is a direct consequence of the so-called monetary policy. expansionist. Inflation is a direct cause of currency depreciation.

The CPI is a basic basket calculated with estimated weights between goods and services. We find the prices of non-replicable basic products that rise much more than the average and that we consume every day (food, energy) and the basket is moderated with services and goods that we do not consume. every day (technology, leisure, etc.). 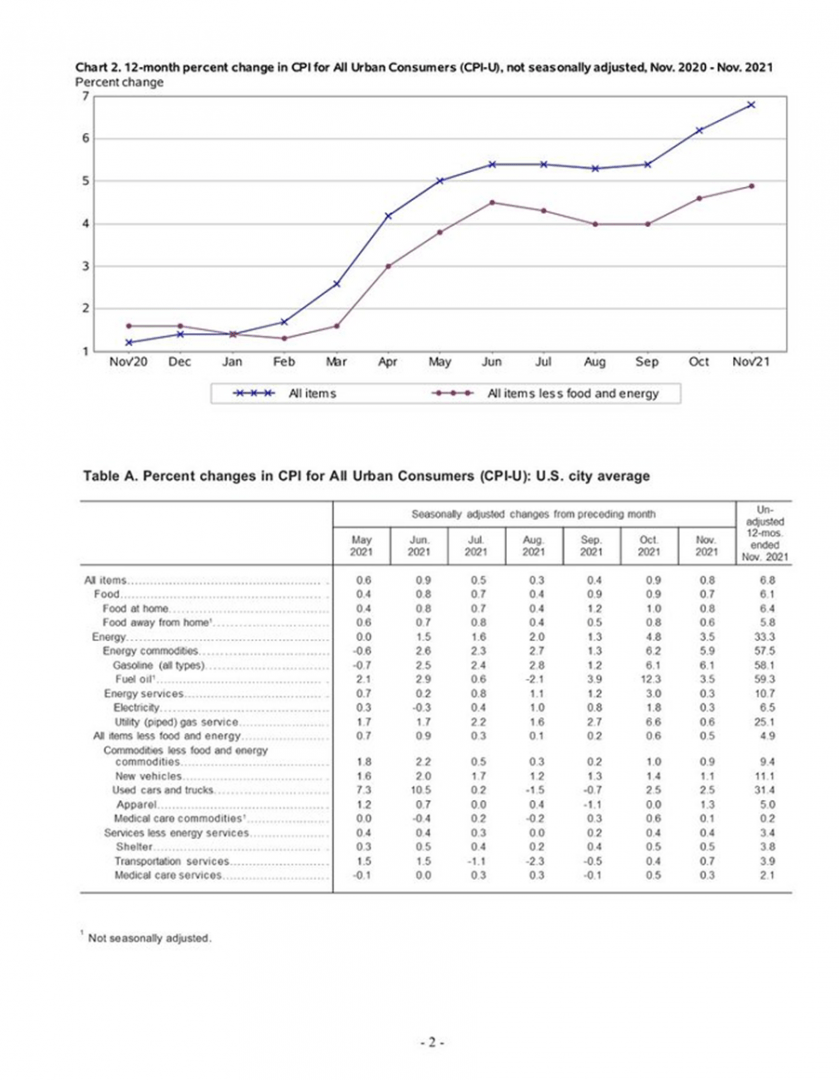 Prices do not increase in tandem between 2 and 5% due to a coordinated decision of all companies in all sectors. It is a monetary phenomenon.

The good thing for the most interventionist politician is that the Government benefits the most from the rise in prices but it can blame others for it and, on top of that, present itself as a solution by giving a paper payment- more and more useless money.

The story of monetary interventionism is always the same:

The monetary factor is essential to understand the continuous rise in almost all prices at the same time. A huge monetary stimulus aimed in its entirety at massive current spending plans, infrastructure, construction and renovation, energy-hungry sectors and checks to families funded by debt monetized by central banks.

To this must be added the effect of the shutdown of an economy just in time during the pandemic, which generates bottlenecks exacerbated by massive growth in the money supply.

Much of what they sell to us as â€œsupply chain disruptionsâ€ or effects on input costs is nothing more than money spent on relatively scarce assets. More quantity of money directed towards the same number of commodities.

Professor John B. Hearn explains it: â€œStephanie Kelton, a leading MMT advocate, said that ‘all of the inflation over the past 100 years has been cost-driven inflationâ€. is a deficient aggregate demand in the economy. As much as we want to believe that oil prices, energy prices, wage hikes and falling money values â€‹â€‹can cause inflation, it just doesn’t make sense. By definition, all inflation is defined by more currency units used in the same number of transactions. All of the above can change the relative prices, but none of them can increase the number of currency units in the economy. There is therefore only one cause of inflation and it is the action of a Central Bank which, in a modern economy, manages the stock and the flow of money in this economy â€.

Indeed, a good or a service can increase in price because of a temporary effect, but not of a generalized increase of the great majority of the prices. When they try to convince us that inflation has no monetary cause, they make us look at a good or service that has increased, for example, by 50% temporarily, but they hide from us that the median of the goods and essential services increases more than the CPI every year. This is why Keynesian economists always speak of annual CPI and not of cumulative CPI. Can you imagine if you read that inflation in the eurozone at the time we were told there was no inflation was 45%?

Professor Batten in an article published by the Federal Reserve of St. Louis explains: “The cost push argument sees inflation as the result of a continuous rise in production costs – costs that rise.
unilaterally, independent of market forces. Such an assumption (1) confuses changes in relative prices with inflation, a constantly increasing global price level, and (2) neglects the role that the money supply plays in determining the overall price level. The idea that greedy companies and / or unions can drive prices up continuously cannot be supported by either conceptual development or the empirical evidence provided. Alternatively, the hypothesis that inflation is caused by excessive money growth is well supported â€.

Why was there no inflation a few years ago?

First there was. Massive inflation of risky assets, but also constant inflation in property prices, the costs of essential and non-reproducible goods and services. And a large number of countries in the world suffered from inflation due to the destruction of the purchasing power of the currency during this period, we were told that there was “no inflation “.

Second, the increase in money supply in the euro area or the United States has been less than the demand for credit and currencies in aggregate terms since they are global reserve currencies with global demand. Although the money supply has grown a lot, it did not translate immediately into prices at the national level. The excess money supply has remained in the financial system, thanks to the inflationary brake mechanism available to quantitative easing, which is the real demand for credit.

Inflation was triggered when the credit demand brake mechanism was partially removed, channeling the new money supply into direct government current spending and funding subsidies to economic agents amid a forced halt in the economy. ‘economy. The supply of money far exceeds demand for the first time in years.

According to Morgan Stanley, the biggest impact on companies is the collapse of the margins of those who cannot pass the rising costs on to their prices and this particularly affects SMEs, while large companies can better manage inflation, but the profits do not doubleâ€¦ In fact, the margins tend to go down.

There is a paradox that many companies see their sales increase but their margins and profits fall. This is why bankruptcies and foreclosures have exploded.

The impact of inflation is particularly negative on the most disadvantaged citizens, who have a basket where energy and food weigh much more.

The UN food price index hit a decade high and has increased 47% since June 2020, while natural gas has increased by 300% and oil by 60%. Industrial companies are also suffering from margin declines with a 36% increase in aluminum and 20% in copper in 2021.

The problem is that this situation can generate a significant problem for the vast majority of the population. This is why it is so urgent that central banks stop monetary madness and normalize monetary policy. If the monetary excess is maintained under the pretext of “transitory inflation”, we will end up with a problem that it will have taken several decades to control: persistent inflation and the risk of stagflation (inflation with economic stagnation).

Those of us who work in the financial sector cannot fall into the perverse incentive of defending inflationism just to wipe out a further rise in risky assets. Our obligation is to defend monetary reason and economic progress, not to encourage bubbles. Let us attack inflationism before it attacks us all.

UEFA Europa League: What to watch out for in the round of 16 qualifying

Aside from Doctor Strange, is the multiverse good for anything?

Sri Lanka: heroes to save the nation

Scientism and the health crisis in the modern world